Are you one of those people who dislikes missing out on things?

I also love variety, so I have many interests. Here they are, in no particular order: writing, reading, family and friends, travel, oral history, Indigenous health, teaching Torah from a mystical perspective, and geneology.

It can be hard to prioritise them, so I sometimes end up having a very busy week. That’s what happened last week. By the weekend, all I wanted to do was recharge my batteries. I knew a shot of fresh air from Mt Dandenong would do the trick, so off I went.

My soul felt soothed as I drove past numerous trees on the way to the top of the mountain. Once there, I visited a number of old familiar haunts that reminded me of my childhood. I drove to the house that used to be our holiday home. It’s on the main road in Olinda, nearly opposite the ‘Snooty Fox’ restaurant that burnt down several years ago. 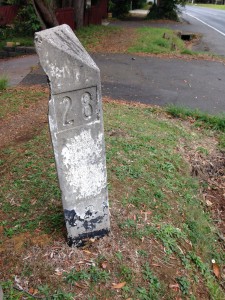 My Hungarian parents and I holidayed there regularly with friends of the family and their children during the sixties and seventies. The house didn’t have a number or a letterbox back then. It was simply identified by being close to the white 28th mile post. The post is still there, but the number 28 is now faded and hard to make out.

I looked down the concrete driveway of our former holiday home. It was now two storeys, not one. A real estate agent’s board out the front said ‘Leased’. The once familiar steep dirt driveway had been transformed into a much flatter concrete drive. 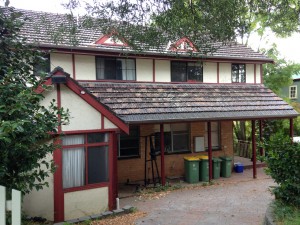 As I peered at the two sets of drab looking rubbish bins standing outside the front of our former home, childhood memories came flooding back. When it rained, the dirt in the driveway would turn to mud, and the wheels of our car would spin as my father urged the car forwards, up a steep incline to the road. My friends and I would sit in the boot of Dad’s green Valiant station wagon. We’d shriek with delight as Dad drove down a windy road to a guest house in Kalorama where we often ate lunch. I remember the clear chicken soup with matzah balls, the wiener schnitzel with chips, and the yummy almond cake. The guest house was called Yosemite. The owner was a Polish man whose surname included the Hungarian word for urine (wee). My friends and I thought that was hilarious, so we’d repeat his name over and over in the car and laugh uproariously. My parents called the guest house ‘Yoshamite’. It was only years later that I learnt how different the Americans pronounce the place it was named after: Yo-sem-itee. But I still think of it as ‘Yoshamite’.

As I stood looking at the house, I found myself in a dreamlike, meditative state. More precious childhood memories came flooding back: the lifesized Tinman from the Wizard of Oz that we made out of pineapple tins threaded on bits of string; the long walks on the muddy road, wearing black gumboots; picking blackberries and trying to sell them to people as they drove past our house; eating chestnut puree made from chestnuts we picked; getting the bus to Belgrave and buying model cars from the toyshop that we’d assemble; visits to William Ricketts Sanctuary; and the mouth watering chocolate cake at the ‘House of Ideas’. 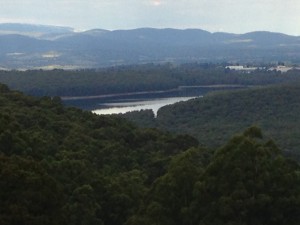 My short visit reinforced the idea of the importance of place in bringing back memories. But it’s not just useful for writers of memoir. I think it’s also helpful for writers of any kind of books to visit the places they are writing about if they get the chance. It’s such a different experience to simply read about a place. That’s one reason I’m looking forward to travelling to Europe later this year.