March was a bitter sweet month whilst my parents were alive.

Dad’s birthday on March 6 was followed one week later by Mum and Dad’s wedding anniversary on March 13. If Mum ever heard a superstitious person say that thirteen was an unlucky number, she would reply that thirteen had always been a lucky number for her and Dad.

Mum and Dad met shortly after the end of the Second World War in Budapest at ‘The Joint”. (Incidently, ‘The Joint’ had nothing to do with smoking pot! It was short for the American Joint Distribution Committee, a Jewish humanitarian assistance organisation funded by American Jews.)

Mum worked at the Joint’s Budapest branch immediately after the war. She initially served there as a volunteer in 1945 in exchange for food. Some time later she was offered a paid position. This involved distributing food and firewood to Jewish children and elderly people who had survived the war.

Mum also ran a department within the organisation that was responsible for getting letters from relatives to displaced persons (DP) camps. “We sorted out letters and we had the means to send those letters to different camps in Germany and everywhere else so that people who were liberated had a chance to hear from their families, if there was anyone left…” Mum told me during the hours of oral history interviews I conducted with her. At that time, George (who was to become Mum’s husband) brought a letter to the Joint to pass on to his father who was in a DP camp after having been liberated from a concentration camp in Mauthausen, Austria. George was impressed by Mum’s efficiency and politeness. He ended up asking her out for a coffee. “Well you don’t have to do that because I’m paid here. I’m not used to being picked up by anyone in an office. I’m used to being introduced to people socially”, replied Mum.

George was determined to find a way to date Mum. He used his resourcefulness to find a mutual friend called Vera who also worked at The Joint. After explaining his predicament to Vera, she came to his rescue and invited Mum and George to afternoon tea at her place. ‘We clicked’, said Mum.

And the rest, as they say, is history.

George farewelled Mum in Budapest, and migrated to Australia in 1947 for a better life. He eventually proposed to Mum in a letter. She accepted his proposal, and arrived in Sydney in 1948 to start her new life in Australia. She was a fiesty twenty-two year old Hungarian who spoke little English. Dad was twenty four. 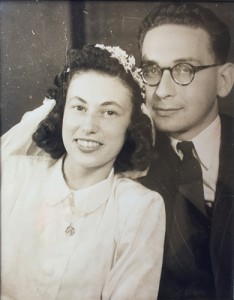 After working very hard for eight years, they decided it was time to start a family. Their first child was due in March 1956. Mum was hoping for a girl. Dad wanted a boy.

Tragedy struck. On March 17, Mum gave birth to a baby girl. She was stillborn.

Every year on March 17, Mum would light a tea-light candle and burn it in memory of her stillborn baby. It was a horrible day for Mum to get through. Dad didn’t ever talk about what had happened.

Now that Mum is dead, I continue the tradition of lighting a candle for my stillborn sister on March 17. And now that Mum and Dad are both dead, I find March to be a sad month of memories. It’s hard to be the only surviving child in a family, especially after both parents have died. Sometimes I feel like an orphan. It’s times like that when I miss my stillborn sister most acutely. However my husband and I gave our first child, a daughter, the name that my sister would have been called by…Dianne. I’ll never forget the tears of happiness in Mum’s eyes when we told her the name we had chosen for our baby. It was the least we could do to ease her pain.

PS. Mum and Dad were married for 41 years, until Dad’s untimely death from prostate cancer in 1989.